How is that playing field? A million miles off the level

Transport for London has become a major beneficiary of the upcoming Online Safety Bill.  Not what you would expect but it’s funny how things can turn out.

Google has prepared some extremely glossy promotional materials touting the myriad child and family oriented initiatives the company has been taking of late.

The passageway between the central concourse of Westminster Tube station and the western entrance on Whitehall (or rather, strictly-speaking, on Parliament Street) ought to be renamed Mountain View for the duration. Google completely owns the space. 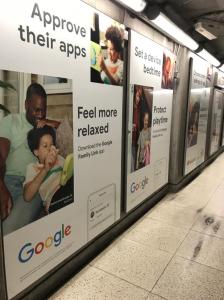 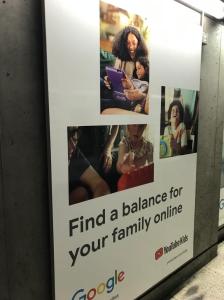 And btw, which UK Government building is pretty much right outside the tube station’s western entrance? Yep, you guessed. DCMS HQ, but I won’t labour the point. Yet.

Don’t get me wrong. The resources which Google has put together are excellent and their presentation is top class. My point is a different, if rather obvious one. Why are these ads appearing in such copious quantities now and why are they being placed where you can be sure key policymakers will definitely see them?  Er…. I’ll get back to you on that. And one notes the ads address only parts of the agenda set by the Online Safety Bill, not all of it.

I have not seen an ad from Google, or anyone else, which says

Our transparency reports give a true and fair, rounded view of our performance in respect of child safety and child welfare. Before we publish them they are signed off by an independent group of experts. These experts had the knowledge, time and resources to understand how we work.  They guided us in terms of what we reported on and how.  Because these experts felt able to sign off on our transparency reports we know you (MPs, Ministers, parents, children and others) will trust them. And if anyone wants to replace these independent experts with a statutory regulator who would do the same sort of thing, we’re fine with that.

It is not just Westminster Tube or other parts of the London Transport network that are benefitting from Google’s not thinly disguised attempt to influence public, Governmental and Parliamentary opinion at this crucial time. Their ads are in all kinds of physical world publications. You remember them? They involve ink and paper. Clearly Google has decided not to bet the farm on their messages reaching all the right people at the right time via the internet. Old-fashioned media still count for something.

I have not been to Brussels in person since the first UK lockdown but, as European Institutions progress with their equivalent pieces of legislation, I wouldn’t be at all surprised to discover the Brussels transport system and a raft of Euro publications similarly are benefitting from the munificence of Silicon Valley.

A recent report by the  “Corporate Europe Observatory” documents just how extensive, how massive, Big Tech’s lobbying efforts are in the EU. In part the Observatory’s report was made possible by the EU’s transparency rules but we have no reason to suppose, pro rata, the scale and nature of lobbying would be significantly different in the UK or anywhere else where legislatures are contemplating changing the rules of the game.

612 companies, groups and business associations lobbying the EU’s digital economy policies. Together, they spend over €97 million annually lobbying the EU institutions. This makes tech the biggest lobby sector in the EU by spending, ahead of pharma, fossil fuels, finance, and chemicals.

Between them they employed 1,452 lobbyists. But, as the report also reveals,  there is a hierarchy of lobbying activity

in spite of the varied number of players, this universe is dominated by a handful of firms. Just ten companies are responsible for almost a third of the total tech lobby spend: Vodafone, Qualcomm, Intel, IBM, Amazon, Huawei, Apple, Microsoft, Facebook and Google spend more than €32 million making their voices heard in the EU.

The number of meetings these lobbying groups have organized with Commission officials and others is eye wateringly large. Since December 2019 and up until the time the report was compiled, Google held  46 meetings with Commission officals, Facebook and Microsoft 40 each, Amazon 20 then Apple 14 and Huawei also 14.

Then there’s the Think Tanks, academic networks, trade associations and the rest.

And just in case we think the Observatory’s report provides the full picture, the authors were the first to say it does not. There are still gaps and murky corners where surrogates lurk, affecting an air of independence and detachment which is wholly unwarranted, verging on positively deceitful.

And don’t get me started on the priesthood of tech. These are the people, typically ex employees of Big Tech and similar, who have a shared ideological perspective.

Children’s groups and other consumer bodies will never be able to compete. Fortunately we do not have to (see below) but we have to be in the game.

King Canute was the last Viking King of substance to rule in England.  Apparently a vain man his sycophantic courtiers were constantly flattering him and telling him how powerful and all-prevailing he was and would continue to be.

Canute is reputed to have taken his throne down to the beach and, in the presence of his courtiers, summoning all his majestic might he commanded the tide to stop. But it didn’t. He taught his courtiers a lesson.

The high panjandrums in Silicon Valley are at least as smart as King Canute. They know  they have had an unbelievably good run. They also know the tide is running against them and it is irreversible. But they are digging ditches and potholes to slow things down to the greatest extent possible. For them delay is money.

But slowing things down means more children will be harmed who need not have been. And that is precisely why we all need to increase our impact. The tide is with us. We just need a better surf board.

John Carr is one of the world's leading authorities on children's and young people's use of digital technologies. He is Senior Technical Adviser to Bangkok-based global NGO ECPAT International, Technical Adviser to the European NGO Alliance for Child Safety Online, which is administered by Save the Children Italy and an Advisory Council Member of Beyond Borders (Canada). Amongst other things John is or has been an Adviser to the United Nations, ITU, the European Union, the Council of Europe and European Union Agency for Network and Information Security and is a former Executive Board Member of the UK Council for Child Internet Safety. He is Secretary of the UK's Children's Charities' Coalition on Internet Safety. John has advised many of the world's largest internet companies on online child safety. In June, 2012, John was appointed a Visiting Senior Fellow at the London School of Economics and Political Science. This was renewed in 2018. More: http://johncarrcv.blogspot.com
View all posts by John Carr →
This entry was posted in E-commerce, Facebook, Google, Internet governance, Regulation, Self-regulation. Bookmark the permalink.
Loading Comments...
%d bloggers like this: